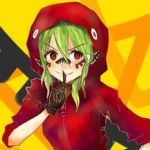 A girl who likes Don't Hug Me I'm Scared! I don't want this to die yet to be honest... I'm waiting for 19th June for the next episode. I watch all the episode and got some sick theories from this series.

I also write Fanfics but I didn't write any from this series... Don't worry I'll do one and be creative with the Fanfic!

Well here's my favorite characters from the series!

Retrieved from "https://donthugme.fandom.com/wiki/User:MyNameIsPanda?oldid=7948"
Community content is available under CC-BY-SA unless otherwise noted.