When Malcolm gets angry, hate, when people "love the wrong way"

" Have you ever wondered why we're here? What's it all about, you've no idea."

He is a butterfly with a turquoise face and a blue mouth. He has two black antennae on his head, with balls on the end. He wears three rings and he has polka dots near his arms. He wears black shoes and has yellow wings, which have shapes such as hearts, squiggly lines, stars, rhombus, and circles. He has a red heart on his chest and a unibrow when brainwashing Yellow Guy.

At first, Shrignold seems nice and friendly by talking about how love and friendship will make Yellow Guy happy, but soon he starts manipulating him telling him he is lonely and that no one cares about him, in order to make him join his cult. When he tries to brainwash Yellow Guy, he acts more unnerving and forces him to join the cult by tying him to a chair and changing his name. It can be said that he has the talent to easily brainwash people as he perfectly fooled Yellow Guy into believing that Shrignold was going to lead him into experiencing love in the usual manner, even though, it ends with Yellow Guy almost joining a cult.

Him talking about love with Yellow Guy

Shrignold telling Yellow Guy he was feeling lonely, when he was just hungry

Him saying everyone has a "special one"

Him explaining love is "protected by a ring"

Shrignold revealing he worships the King of Love, Malcom

Shrignold's appearance in the sixth episode. 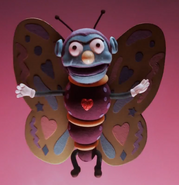 Shrignold with a red heart on his chest and a unibrow