Don't Hug Me I'm Scared Wiki
Register
Don't have an account?
Sign In
Advertisement
in: Characters, Objects, Males,
and 5 more

Gilbert the Globe is a character that briefly appears in Don't Hug Me I'm Scared 4.

An image of him was posted on Becky's Instagram around January 20th and quickly after was posted in an update on the DHMIS Kickstarter page. He was going to sing to the puppets, only to be interrupted by Colin.

He is a globe of the earth with two round eyes and a smiling mouth. His right eye is situated on the land part, while the left eye is on the ocean part. His stand is probably wooden since the stand is a chocolate brown color. 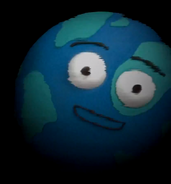 One of his cameos, when the main characters get sucked into the digital world

Gilbert's cameo in the digital world. 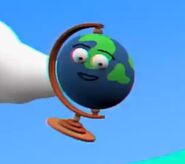 Another cameo of Gilbert in the digital world.