The episode opens with a drawing on the fridge, depicting Red Guy, Yellow Guy and Duck sitting at a desk smiling with a calendar showing June 19 on the wall (the "get creative" letters from the first episode can also be seen on the fridge). We see Duck Guy and Yellow Guy sitting in a kitchen (possibly Roy's, as seen on the label of several items). Red Guy is strangely missing.

The two inspect their surrounding, and Yellow Guy comments that something is different. Duck Guy agrees that something is missing and looks at the painting again, the painting seems normal at first, but upon taking a second look, it changes: Yellow Guy is still sitting and smiling, but Red Guy is standing outside the window, and Duck Guy appears dead. The scene then cuts to a photograph of the three on the wall.

Suddenly, Yellow Guy points to a talking loaf of bread, asking if he is what is missing. A can of spinach then emerges from a cabinet, and starts asking them if they are hungry. Yellow Guy replies with a simple 'No', making the spinach can sing 'doot' repeatedly while thinking of something else to say. It tells the two lots of people get hungry, before a giant steak appears. The steak tells them hungry comes from their body and their body needs to be healthy, poking Duck Guy with a fork, who tells him to get off of him.

The spinach can and steak tell them that certain foods will make their teeth turn grey. The steak does a tap-dance routine and tells them to 'get healthy now'. He is interrupted by the phone ringing, and Duck Guy goes to answer it. He finds himself in a dark operating room, with the song continuing on a television. The steak explains how a body is like a house, with all the different components in different rooms. Food comes through the mouth, the chimney, and greets the different organs in the house. The healthy foods are nice to the organs and are invited to stay for a party, but the unhealthy foods are rude and have to leave.

The phone rings again, and Duck Guy answers it. He then finds himself back in the kitchen, with the phone replaced by a sandwich. The spinach can and the steak repeat themselves, saying certain foods make their gums turn grey. Duck Guy says something is wrong, but the spinach can interrupts, asking how to know which foods are healthy. The steak says that food groups can be sorted easily by a "health shape": A strange, uneven chart, seemingly a parody of the food pyramid, with different foods arbitrarily labelled and grouped together. He then says eating plain-looking foods keeps the body healthy, and demonstrates by pouring cream down a body model. Duck Guy says he needs to go, but is interrupted by the spinach can asking what a fruit salad is. The steak says the fruit salad is a "fancy, show-offy food" and that it will clog up the body "with unnecessary details," and pushes the body model off the table, breaking it, and stomps on it.

The scene cuts back to the kitchen, Duck is grabbed by a fridge, that says everything tastes great, but they should wait before they eat certain foods (meanwhile, Red Guy's head can be seen in the microwave behind him and Roy can be seen watching them from the ceiling). Duck Guy says that he has had enough, and knocks over the camera saying 'I don't wanna do this anymore!' (Red Guy can be briefly seen after the camera is knocked over). He wakes up in the dark operating room with a giant can standing next to him, and he continues to watch the TV. The spinach points at a pizza slice on a tray, and says Yellow Guy is better off with white sauce. The steak however says white sauce will make their teeth turn grey. The fridge says to just throw it away, and points to a can of Duck, saying to try something else. The steak points at a pie, saying Yellow Guy will end up sad inside.

The scene cuts back to the operating room, where the giant can starts eating Duck Guy's organs. The song continues on, and the fridge says that everyone has their teeth turn grey and eating yeast makes them normal. The steak, however, says too much yeast will make their teeth turn grey. The spinach can offers Yellow Guy some onion paste, with the steak saying it wasn't onion paste and that he shouldn't eat food from a stranger's plate. The entire band then begins chanting 'stranger's plate' repeatedly. The spaghetti briefly morphs into Red Guy's face, red smoke comes out of the microwave, and the giant can continues eating Duck Guy's organs while red mist (presumably blood) comes out of Duck Guy's intestines. The can leaves to be replaced by another one. The can in the microwave spins around, revealing that it expires on June 19.

Yellow Guy looks deep into his spaghetti while the chant in the background becomes screaming, and sees Duck Guy's screaming head (appearing to show him dead, with X's over his eyes). The camera zooms out, showing a steak on the plate. A ding from the microwave is heard, a giant can is now holding a pie made of Duck Guy, and confetti falls. Yellow Guy is shown obese, having eaten Duck Guy, evidenced by many empty cans featuring Duck Guy's face. The phone rings, and Yellow Guy turns to look at it. The scene cuts to Red Guy walking out of a phone booth holding a suitcase as the credits roll.

Spinach Can: Are you hungry? You look to be a bit hungry!

Steak: That's your body. Hungry comes from your body!

Duck Guy: Get off me!

Steak: Greedy! To eat all that! You'll end up with your teeth all grey!

[Steak starts to do a tapdance routine.]

[The phone rings. Duck picks it up.]

[On the other side is himself in a dark operating room. The word "hello" echoes. A small echo can be heard saying, "You need to know what's right from wrong." He stares at the TV to see the song continue.]

Steak: You see, the body is like a special house! With blood, hair, and organs in the different rooms! Oh look, there's Mr. Bladder in the basement! (chuckles)

Steak: Now food comes in through the chimney—mouth—and goes from room to room, greeting the different organs!

Steak: Now, the good healthy food is very nice and polite to the organs, and so is invited to stay for a party!

Steak and Spinach Can: Yay!

Steak: But the bad, not healthy foods are very rude, and must leave through the cap flap!

[The phone rings again. Duck Guy picks it up again, but it just cuts back to the kitchen.]

[The phone Duck Guy is holding has now turned into a sandwich.]

Steak: Greedy to eat all that! You'll end up with your gums all grey!

Spinach Can: Exactly! How do we know which ones are the healthy foods to eat?

Spinach Can: But wait! What's this?

Steak: These foods will clog up the body with unnecessary detail! (pushes body model off table and stomps on it) Oh no, look! It's all broken and on the floor!

Fridge: Everything tastes great! Maybe we should wait!

Fridge: Before we put it on the plate!

Fridge: Or it could be too late-

Duck Guy: I don't wanna do this anymore!

[Duck wakes back up in the hospital, with a large, yellow can in front of him. Yellow Guy is now alone with the Steak, Spinach Can and Fridge.]

Yellow Guy: (in the background) I choose a pizza slice! Bread and cheese and tastes of nice!

Spinach Can: What's that? A pizza slice? But you're better off with plain white sauce!

Fridge: Doesn't matter! Just throw it away! Why not try something else on your tray?

[Fridge points to a microwave, with Duck being cooked in a can.]

Steak: Oh, what's that? A lovely pie? But you're gonna end up sad inside!

Spinach Can: Ugh, sad inside? You're gonna make me sick! BLAAAHHH!

[Scene cuts back to the hospital. The song continues on the TV, but it focuses on the large yellow can, which starts eating Duck Guy's organs. Maniacal laughter is heard in the background]

Yellow Guy: (in the background) I choose the ice cream beef.

Spinach Can: (in the background) What's that? Your kidney spleen? Kidney spleens make your teeth go grey!

Fridge: Well, everyone has their teeth go grey! Just eat yeast and it will go away!

Steak: But how much have you had today? Too much yeast makes your teeth go grey!

[Briefly cuts back to the hospital, where the large can continues to eat Duck's organs.]

Spinach Can: How about some onion paste? Looks like blood, have a taste!

[While the Steak and Spinach Can are chanting, a few more hospital sequences are shown, the first showing the large can eating a little more. Yellow Guy's spaghetti briefly morphs into Red Guy's face. Red smoke comes out of the microwave. The can continues eating Duck's organs while red mist (presumably blood) comes out of Duck's intestines. The can leaves to be replaced by another one. The can in the microwave turns to reveal its expiration date: 19/06. Yellow Guy looks deep into his spaghetti and sees Duck Guy's screaming head. It zooms out to show a steak on Yellow Guy's plate.]

[Cuts back to hospital, with the large can holding a pie made of Duck. A ding can be heard as confetti falls. It then shows Yellow Guy, now obese, with many empty cans of Duck in front of him, with a little bit in his mouth. The phone rings once more.]

[Scene cuts to outside the room, Red Guy, wearing a trench coat and a scarf, is seen walking away from a red telephone booth with a suitcase in hand. The credits roll.]

The hard-boiled egg from Episode 3 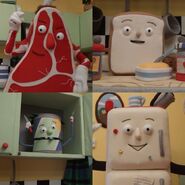 Blink and you'll miss the HELP! sticky note and Red Guy's head in the microwave.

The "Health Shape", note the can on the right, next to "PLAIN FOODS"

The canned Duck Guy, seen behind the Cooked Meats when the "Fancy Foods" are shown