Yellow Guy and Red Guy are sitting in their chairs while Duck rocks on the rocking chair which he is sitting on. Red Guy tells them to stop mucking around and that they only have five minutes until their TV show is on, and it cuts to the TV which is currently showing static. Duck replies to Red Guy and says that five minutes isn't enough time. Tony the Talking Clock comes to life and tells them that there's time for a song. Red Guy, breaking the fourth wall, asks the viewers who Tony is. Tony then begins to dance and sing, telling the puppets where time can be placed. (Such as a wall or a wrist.)

Tony tells the puppets that the past is far behind them and the future doesn't exist. Yellow Guy asks Tony what the time is and he replies by saying that it's quarter to nine. He then says it is time to have a bath. Duck insists that they're already clean, but Tony ignores him and scrubs Yellow Guy until the water is brown. He later tells them that time goes only one way and cannot go in reverse, and to watch the time go fast like a merry-go-round. He later tells the puppets to go on a journey through time, but Red Guy tells him that he and the other puppets don't want to go and that they will miss their show if they do. Tony tells the puppets to not be stupid and to go back in time anyways, and they see what it was like in the past. Yellow Guy finds a tree with circles inside and Tony later finds a tree that is older and dies. Duck looks at a fresh apple from a tree branch, which soon rots.

Tony tells them that time can be told by the moon or the sun and the time flies fast when they have fun. Duck is seen, who is about to finish his stack of cards which then gets ruined by Tony. The puppets give out examples of when having fun is allowed and Yellow Guy says that he is friends with his dad, who growls angrily. Red Guy asks Tony what happened after the old days. Tony begins to tell them about the future and Yellow Guy tells him that an old man died. Tony ignores the old man and instead pays attention to a computer, and everything you can do in the future. Roy is seen looking at an explicit website as Yellow Guy says that his dad is a computer and his father growls once again.Tony appears on the computer and tells Yellow Guy to look at the time.

Fish can be seen on plates, in the bath, and scattered everywhere in a room. Tony tells them how time can also be useful, and the puppets ask when time began and when it will end. Tony tells them that time is important and he is only a clock. Red Guy and the other puppets begin to question time, which angers Tony. He begins to beep loudly and everyone except Yellow Guy covers their ears, making Yellow Guy's ears bleed.

The clock tells them how strange it is how time makes their appearances change. Yellow Guy looks in the mirror as his appearance changes, Red Guy's hair grows longer, and the flesh on Duck's left hand begins to melt off. Yellow Guy lets out a cry. Tony just stands still and watches the puppets suffer, and Duck's left hand becomes nothing but bones and the puppets' appearances begin to get worse. Yellow Guy tells the clock to make it end as Duck's right eye falls out. Red Guy shakes and it shows a close-up on his face. Tony tells them he's only a clock and they'll be fine but eventually everyone runs out of time, which means that everyone will die. As the camera zooms out it is revealed that they were all watching TV, with Duck's eyeball laying next to the TV and the picture of the non-existent future hanging on the wall. Red Guy shuts off the TV.

In the credits, maggots duplicate on what looks to be Yellow Guy's hair.

Below is a transcript of the episode.

Red Guy: Come on, guys, stop mucking around. We only have five minutes until our show's on.

Tony: Time is a tool you can put on the wall or wear on your wrist. The past is far behind us, the future doesn't exist.

Tony: It's quarter to nine, time to have a bath.

Duck: What do you mean, we're already clean!

Red Guy: But we don't really want to. We're going to miss our show.

Tony: DON'T BE STUPID, FRIENDS! C'mon, it's time to go! Time is old like the Victorian times.

Woman: With cobbles and plague and speaking in rhymes!

Man: With cobbles and chimneys, a simpler time!

Man 2: With cobbles and sawdust and batteries and slime.

Yellow Guy: This tree that is old has circles inside!

Tony: The tree that is older has shriveled and died.

Duck: The apple that is fresh is ripe to the core!

Apple: And I rot over time and I'm not anymore...

Tony: Time can be told by the moon or the sun but time flies fast when you're having fun. There's a time and a place for mucking around!

Red Guy: And then what happened after the olden days?

Tony: Time went new and got old like history. Stuff from the past went into a mystery.

Tony: But look, a computer. Everything's cool, IT'S THE FUTURE! Time is now, the future anew, and look at all of the wonderful things you can do. With gadgets and gizmos and email addresses!

Yellow Guy: My dad is a com-computer.

Tony: Look at the time!

Duck: It's quarter to eight, there's fish on my plate!

Yellow Guy: It's twenty past day, there's fish on my tray!

Duck: It's eleven to twelve, there's fish in the bath!

Tony: Now you can see the importance of time. It helps us make pizza, it keeps things in line.

Duck: But when did it start?

Yellow Guy: And when will it stop?

Tony: Time is important and I am a clock.

Red Guy: If we run out of time, where does it go?

Yellow Guy: Is time even real? Does anyone know?

Duck: Maybe time's just a construct of human perception. An illusion created by—

Sunrise, sunset, night and day. The changing seasons, the smell of hay. Look at your hair grow. Isn't it strange how time makes your appearance change?

Tony: It's out of my hands, I'm only a clock. Don't worry, I'm sure you'll be fine, but eventually, everyone runs out of time.

The puppets sitting down, waiting for their show to start

A picture of the puppets in the past

Red Guy with the TV guide

The puppets learning about the past

The tree with circles inside

Tony pointing at a computer

Roy looking at what appears to explicit material

Tony looking at the decaying puppets 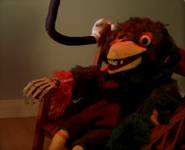 The puppets and the end

Red guy behind the scenes

Red Guy aging behind the scenes 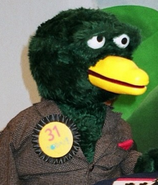 Duck behind the scenes

Roy behind the scenes