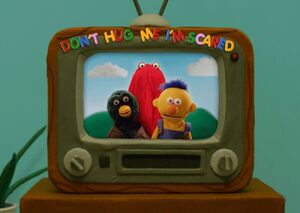 Don't Hug Me I'm Scared: The TV Series is an upcoming project headed by Becky Sloan and Joseph Pelling. The project is being produced by Conaco, Conan O'Brien's production company.

Information about the television series is currently scarce outside of the trailer and the pilot episode. There seems to be no confirmed release date. However, the pilot episode was released at the Sundance Film Festival on January 29, 2019 and in 2020, the show was picked up by Channel 4. It is currently in production.