Don't Hug Me I'm Scared Wiki
Register
Don't have an account?
Sign In
Advertisement
in: Characters, Teachers, Males,
and 8 more

Technology, the digital world, interrupting people, bragging about himself, getting "personal information" out of people

Colin is a normal-sized computer puppet with square eyes and a square mouth near the bottom of his monitor. His screen is dark and rectangular, with a graphic of a wrench, nut, and screw on it. Occasionally, images flash on his screen when he thinks of something. He has multicolored keys that change colors multiple times throughout Episode 4. His left hand appears to be able to change into a pointer or an hourglass. When he gets angry, he has bloodshot eyes and his hands turn into red wires shaped like human hands.

When inside the digital world, Colin's appearance notably changes. He gains legs made from computer wires, and he has a computer mouse for each foot. His keyboard becomes his torso.

He is arrogant, bragging about how "clever" he is and singing about himself. He also seems to be quite interruptive. Sometimes he ignores questions posed toward him, preferring to talk about himself, or the "digital world." He likes gathering personal information and seems to be obsessed with oats, continuously showing them to the puppets.

Colin explaining what he's made of

Colin with the main trio

Colin, enraged after being touched 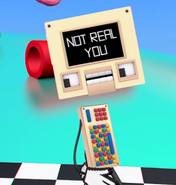 In the Digital World